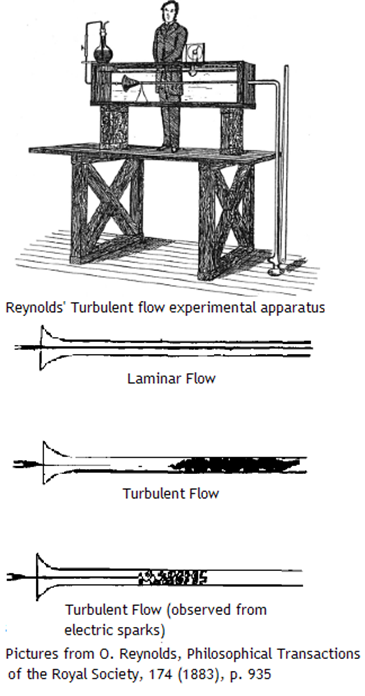 When analyzing a fluid flow,  first of all fluid dynamicists calculate the Reynolds number, because its value tells them a lot.

If two flows past similar bodies  have the same Reynolds number, they are dynamically similar. Dynamic similarity has several uses.

This is why experienced fluid dynamicists calculate the Reynolds number using the relevant scales. If thus calculated Re is very small, say, less than 1, even for bluff bodies like a circular cylinder the flow will remain attached, and will become steady after the initial transient. In Flow Illustrator this can be observed by the vorticity distribution becoming time-independent after the transient. As Re increases, the flow becomes unsteady, at first with time-periodic vortex shedding, and then loosing periodicity and eventually becoming turbulent. Also, with large Re thin boundary layers form near the surface. This, too, can be observed in Flow Illustrator by the behavior of the vorticity.

Consider, for example, two flows past geometrically similar aerofoils with the same angle of attack. Each flow has its own value of velocity far upstream, and the physical properties of the fluid are also different: say, in one case the fluid is air, and in another case the fluid is water.

Now, let us do rescaling. As a unit of length we will use the chord length of each aerofoil. The result is that in the new units the chord length of each aerofoil becomes exactly 1, and it is now non-dimensional. Since the shapes are similar, the aerofoils will also have the same non-dimensional maximum thickness, and all other geometrical characteristics will also be identical.

Now, an interesting question is: in these non-dimensional units will the velocities of these two flows be identical not only far upstream but everywhere?

In general, the answer is no. One can rewrite the Navier–Stokes equations governing the fluid motion in these new rescaled variables. It turns out that they will be almost identical, that is identical with an exception of one coefficient only, which is equal to the product of the length scale and the velocity scale, divided by kinematic viscosity. This coefficient is called Reynolds number. If the velocity scale is U, the length scale is L, and the kinematic viscosity is ν, then the Reynolds number Re=UL/ν. If our two flows are characterised by different values of Re, then the solutions will be different.

However, if it happens that these two flows have not only similar geometry (and, actually, similar boundary conditions, like the angle of attack for example), but also the same Re, then in non-dimensional form the entire flows will be identical. Such flows are called dynamically similar.