The concept of Flow Illustrator arose in the early 2004 and it took a year to create a working version. The original idea and design was by Prof. Sergei Chernyshenko. Flow Illustrator became available as a web service at first, when its development finished mid 2005. The first version was written in C# and worked under .NET on a Windows server. It remained online for several years rapidly growing popularity. 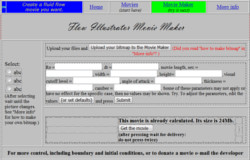 On the basis of this initial development several MSc students of Imperial College London, supervised by Prof. Chernyshenko, worked on various derivatives of the original code. In particular, in 2010 Xavier Maurin was developing a version with real-time input from a videocamera with background separation, in 2011 Michael Moyes developed a stand-alone version with input from a drawing canvas, in 2012 Olivier Guimbal worked on input from Kinect while Tom Oldfield replaced Intel MKL FFT with FFTW.

The current web service was developed and is supported by Andrei Chernyshenko. It uses a modified c++ version of the original C# Navier-Stokes solver, OpenCV for image processing, and Python for web implementation.