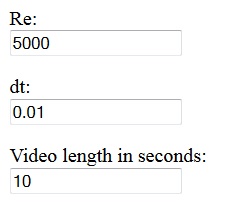 The main parameter controlling the nature of the fluid flow is the Reynolds number Re. From the physical viewpoint Re can be interpreted as the ratio of inertial forces and viscous friction forces. When Re is small, the flow tends to be quiescent (laminar), and when Re is large, the flow becomes unsteady and turbulent. (For specialists, in Flow Illustrator Re = U L/ν, where U is the velocity far upstream, L is the distance (in the physical space) between  the top and bottom of the picture, and ν is the kinematic viscosity of the fluid.)

The visual speed of the flow is controlled by dt.  If there is no body at all then between two frames of the video the fluid particles will shift by the distance equal to dt times the vertical dimension of the picture. Hence, decreasing dt will have the effect of showing the flow in slow motion.   If not for numerical errors, which depend on dt, this parameter would not affect the flow itself but only the video speed.

The remaining parameter is the video duration.