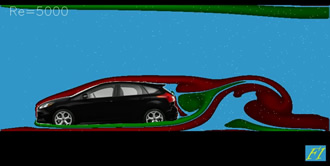 The video will show your object surrounded by fluid, which is suddenly brought into motion with a constant speed. Small white particles, like snowflakes, will randomly appear out of thin air, follow the fluid motion, and then melt. Some of the fluid will be painted with colours reflecting the rotation velocity (vorticity divided by 2) of fluid particles. This trick is widely used in flow visualisations. Together, the snowflakes and the vorticity field give a good idea of the fluid motion.

More details on the flow video

The vorticity levels are shown only when the absolute value of vorticity is above a certain threshold. Under normal conditions far upstream from the solid object the fluid moves with constant velocity, so that the vorticity is zero. Due to friction the velocity at the object surface is zero, and the fluid particles near it have to rotate. This will be shown with colours. Fluid volumes with high particle rotation velocity (high vorticity) can separate from bluff objects and form vortices. Notice the relation between the colours and the pattern of the motion of the snowflakes.

While the numerical algorithm is made to be very robust, selecting too large time step might lead to numerical instability. It can be recognised by the picture becoming irregular, with sharp wiggles. Numerical instability can be used for creating special effects. Otherwise, decreasing time step, increasing resolution, and decreasing the Reynolds number Re can be used to stabilize the calculations.